Skip to content
Five weeks ago today, my heart was broken in the most radical way. The breaking took exactly twenty-four minutes, but I’ll never view the world the same way again.
Five weeks ago today, I pulled up to a dilapidated building in the middle of a rundown city in China in a silver van, accompanied by my squirmy new toddler, my husband, and Echo, the guide assigned by our adoption agency. My breath caught as Echo announced that we had arrived. This was my son’s orphanage – the place he had called home for the last 13 months. I was completely unprepared for what I was about to see and experience.
We drove through the gate after she motioned to the guards to let us in, and it was then that it dawned on me what a privilege it was to be here. There was a sacredness to viewing our son’s second home. It was a piece of his story…a story that began with more questions than answers, and this visit was about putting the pieces of the puzzle together for him. As I opened the door to get out of the van, I immediately recognized the greenery along the sidewalk that had been in his referral photo. It was then that I began to realize how hard this was going to be. We stopped to take a new picture by the greenery as a lump began to form in my throat, but we pushed on and continued toward the door. 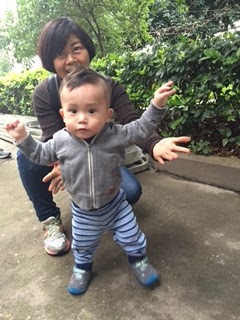 November 2016 – In Front of the Greenery with Echo
We walked along the path and Echo pointed out the “playground” area. It was basically a large open area with a star in the middle that I recognized from our travel update we had gotten just a few days before we left the US. No toys, no play equipment – it was just an open, fenced, safe space. Part of me knew I needed to be grateful that he had been taken outside to play now and then…a very rare gift and privilege for children in an orphanage…but it just broke my heart to see the condition of the grounds and the lack of kid-friendly play equipment. Scarcity was everywhere.
We continued up the path to the front door. As we walked in, we were immediately swarmed by a handful of little girls desperately seeking affection. All were dressed in heavy coats and long pants, as it was chilly outside and the building had no heat or air conditioning. One little girl, likely about four years old, reached for my hand before the door had even closed and, almost instinctively, put my hand to her face. As I told her hello and smiled at her, she began to stroke her cheek with my hand, desperately seeking to fill her need for affection.
We walked into the downstairs baby and toddler room, and I was taken aback by just how quiet the babies were. There was an older woman seated in a rocking chair by the window holding an infant girl with Down Syndrome, and the other handful of babies in the room were simply watching her from their cribs. They were not crying, they were not playing, they were not being held – they were simply existing in their assigned spaces. One little boy chewed on a bite of a snack, slowly, savoring each bite. One little girl watched me cautiously, uncertain as to what I had come to do. Not one child in a crib reached up or asked me to hold him.
There were quite a few empty beds in this room which made me happy because I knew there had been several recent adoptions from this orphanage, and I knew of two children in the building who had families coming soon…but the ones who remained broke me. I so desperately wanted to assure all of these precious children that this wasn’t forever, but I couldn’t. So many of these little ones had such severe neurological or physical conditions that I wasn’t sure I could keep my promise. So many of these kids would be deemed “unadoptable” due to their physical or neurological limitations that files wouldn’t even be prepared for them. They wouldn’t even be given a chance.

After a few minutes here, we headed upstairs to what had been Brooks’s room. As we approached the landing of the stairs, cheers began to erupt and caregivers in white coats swarmed us, taking Brooks from my arms with big smiles and covering him in kisses and hugs. He went willingly from one smiling face to the next until his second mama came walking down the hallway…and at that point, I saw them both light up in such a natural, maternal, and healthy way. He began to flap his arms and squeal as he reached for her, and she reached out to receive him, hesitantly at first. It was so clear that this moment was so hard for her. She loved our son as her own, and it hit me then as I witnessed their connection that SHE was the biggest piece of the puzzle. I hadn’t come to visit his orphanage to see the facility…I had come to see HER. She was his story, and I am just so incredibly grateful for the way she loved and cherished him for 13 months. The puzzle was coming together.

She carried him into the second baby/toddler room which was where he had slept and played all that time. We met his “best friend,” a precious girl just a month older than our Brooks who is now home with her family in Missouri, and I was shown his crib. I stood there for a moment, studying the place where he had spent so much time over the last year. Brooks’s head is quite flat on the right side, and standing at his crib, it now made sense why. Not only was his crib mattress essentially plywood wrapped in a blanket, but his crib faced the door, so when he laid in it, he would turn his head to the right to see what was going on in the room, causing the flat spot. Another piece of the puzzle came to light.

There was loud music playing in the hallways, and it swelled over into the baby room. I now understood where his love of music (and loud noises) came from. Another piece of the puzzle.
We asked about the dosage of the medication that had been sent to us the day before in Brooks’s backpack, and it was explained to us that they had only given him part of his daily dose in order to save some of the “expensive” antibiotic for the other children when they were sick. The scarcity revealed itself again. More of the puzzle was making sense.
At this point, our guide was encouraging us to get back on the road and head to the passport office which was over an hour away, so we began to move ourselves toward the door to leave. We asked her to express our sincerest gratitude to Brooks’s ayi for all she had done for him over the last year, and she nodded while looking down at the floor. It was so clear her heart was breaking as she let him go. She had a hard time even looking at us, let alone watching us love on our boy. I asked if I could hug her, and she allowed it briefly. “Xie xie,” I said. Thank you. Those words will never be enough, but it was what I could offer in that moment. These women, these selfless ayis, are WARRIORS. I don’t know how they do it…love these babies for such a brief time and then send them on to their forever families. I’ll never understand their courage, but I’ll ALWAYS be grateful for it. Brooks is a fighter…and he learned it from this amazing woman.
As we walked out the door, those same girls who had greeted us saw us out. Smiling, waving, hugging us as we left…I think about those girls almost every day. I pray that they are given a chance. I’ll never know, of course, if they were found by a family or if they will age out of that orphanage in the next 8-10 years, their future uncertain, but I can pray and hope and advocate for people to step out in faith and choose this broken journey.
Because what I truly walked away from that orphanage asking myself is this…
IF NOT US, THEN WHO?
I’ll say it again…
IF NOT US, THEN WHO?
I’ve been asking God over the last two years to “break my heart for what breaks Yours,” and I can say with 100% confidence that He has succeeded. Those 24 minutes in that orphanage changed my life, and I am incredibly grateful that I was able to get a glimpse into my son’s life there and have my heart broken so profoundly. I think of those precious girls left behind often, and although I’ll never know for sure, I’d like to think they have mommies and daddies out there waiting for them right now that just haven’t found them yet. Who knows…maybe it’s one of you. 😉

One thought on “Break My Heart for What Breaks Yours: Reflections on Our Orphanage Visit”