Skip to content
Soooo…it’s been a while. 😉 And it would appear I have missed quite a few updates on my dusty little blog here. EEEK.
I could write a litany of excuses as to why I haven’t updated anything here in almost two months, but the truth is that life just gets crazy sometimes and the hobbies take a back seat. I know you all understand that! BUT, I’m no quitter, and I promised a monthly update from each month of Brooks’s first year home, so let’s play a little catch-up, shall we?

5 Months Home on 4/14 – EASTER!
Let’s call this the 5/6 Months Home Update…because truthfully, I’m not sure anymore what he did at five months home and what happened at six. #thirdkidproblems 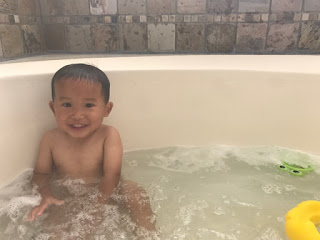 PHYSICAL DEVELOPMENT: So, this little ninja has grown quite a bit since coming home! At his 18-month check-up, he weighed in at just over 20 pounds (1st percentile) and was 30.25 inches tall (2nd percentile). His head was still the same and they marked that as the 5th percentile. He’s small and mighty, but no one seems concerned because he is continuing to grow on his own tiny curve. A month after these measurements were taken, he went in for a little surgical procedure and weighed in at 21 pounds, so we’ll take it! He continues to be a non-stop, all boy, Energizer bunny. His favorite word is GO, and that totally personifies him. He loves to climb, jump, slide, and hang on the monkey bars. We’re fairly certain he will one day excel at gymnastics.

ATTACHMENT: He continues to do so well in this department. No tears at drop-off at church for several weeks in a row now. He has gotten a little more particular about who he lets hold him and always looks to me for approval before allowing one of my friends or a family member to interact with him which is totally appropriate and a GOOD thing. I really couldn’t be any more grateful for how well his attachment has gone. He continues to prefer me for comfort and Daddy for play time…just like my other two did at this age!

LANGUAGE: So, this has been a HUGE season of development here. He attempts to say 50-100 words now (all in English…his Mandarin is long gone) and has begun to try putting words together. He’ll sing song lyrics (“Row row row ba boat”) and understands generally everything we say. He follows commands, “talks” with his siblings, and has a very clear NO. (His favorite word…oy.) It’s really been shocking to me just how far he’s come in just six months of hearing English. He’s a little sponge and it’s such a gift to see him learn!

SLEEP: We had a few rough nights over the last few months, primarily due to travel and some fear/anxiety over seeing us start packing to move later this summer, but I generally can’t complain. He fought a few naps here and there, but he really has done so well here.

FOOD: No huge changes here, but he did discover a few new favorites the last few months. Lately, he’s become a BIG fan of ice cream, clementines, Cheerios with milk, donuts, and he FINALLY accepted chicken nuggets. (Is it sad that I’m secretly thrilled about this? If you’re going to survive in this family, you’ve gotta eat nuggets. Sorry not sorry.) He continues to love all noodles, soups, eggs, blueberries, fruit snacks, yogurt, grapes, rice, quesadillas, and queso. The only things I really can’t get him to eat are ground meats and watermelon. 🙂

HEALTH: Alllllllll the praise hands here – we seem to FINALLY have his asthma under control! We have not needed Albuterol in over two months, and we go back to the doctor this month to discuss weaning him off the steroids. I think the increasing heat has killed off some of his allergy triggers, and the steroids helped him through that rough patch. Also, knock on wood, we haven’t dealt with any sickness since late March. Praise the LORD!
RANDOM FACTS: Brooks celebrated his first Easter since last update! 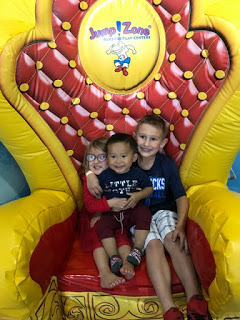 and loved our first family trip as a family of five! 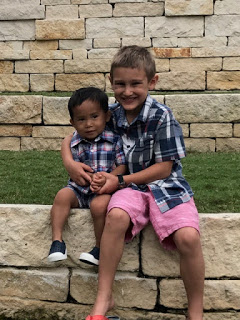 He is LOVING all the pool days… 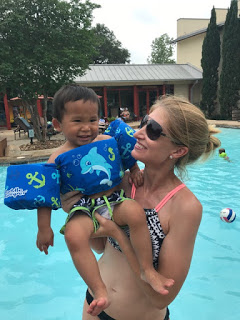 and went to the splash pad for the first time! 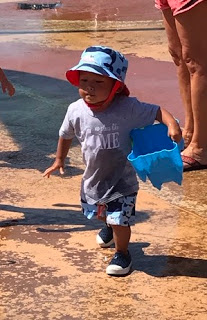 I know all parents think their children are the greatest, but you guys, everyone, and I do mean EVERYONE, who meets this precious little guy remarks on how special he is. I was sitting at a girls’ night dinner last night, and one sweet friend said to me, “I just feel like he’s going to be something really special.” At the risk of sounding all gushy, I couldn’t agree more! Brooks is truly a GIFT to us, and when I think of all the times during the adoption process that we felt like throwing in the towel, I just about lose it. We could’ve missed this…and I’m SO GLAD we didn’t let fear stop us from saying YES to this precious one. What an awesome God we serve.