Happy Valentine’s Day, friends! I hope you are spreading the LOVE today to those around you! We celebrated a little bit last night, but it’s our three-month mark as a family of five today, so let’s talk about the littlest Ezell! This month, we fought some more respiratory concerns, rode the steroids roller coaster, and watched our baby blossom into a toddler. Here’s what sweet Brooks has been up to!

PHYSICAL DEVELOPMENT: We haven’t had a well-check since last update, but according to our home scale, Brooks is now just over 20 pounds! Woohoo! We definitely noticed a BIG growth spurt this month. He began eating us out of house and home and slept nearly 14 hours at night several days in a row. I think he’s also grown taller, but I really don’t have a way to measure him at home. I would bet he’s grown about an inch.

ATTACHMENT: He is still doing very well on the attachment front, although this month, he was VERY clingy to me. Even little things like walking into the hallway for a moment if we were playing on the floor of his room would set him off. We call him a velcro baby…he’s basically happiest on my hip. The problem is that he wants to be on my hip AND wants me moving and entertaining him all the time…that’s no small feat, friends. He has continued to do well in our church nursery on Sundays. 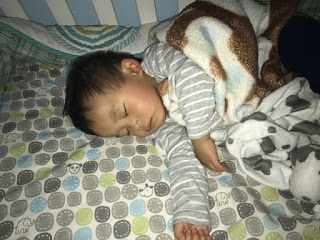 SLEEPING: We had a few rough nights this month, probably due to the “velcro stage” of attachment that we are swimming through. Every once in a while, for no real reason, Brooks will wake up crying in the middle of the night and think it’s morning. We will go up to comfort him, and he will throw an all out FIT when we tell him it’s still “night night” time. He will motion for the door and beg to go downstairs to play. That’s been hard to navigate because we want to comfort him, but we also want him to realize that 3am is not an acceptable wake-up time. Any advice anyone wants to offer would be greatly appreciated. 😉

FOOD: Still no real issues here…food is Brooks’s best friend. Ha! The one thing we did notice this month with food is that Brooks no longer seems to really enjoy Asian food. We offered him his formerly beloved dumplings last week, and he sort of just pushed them around. He still loves all forms of rice and tolerates vegetables, but he has truly Americanized when it comes to food. His favorites this month were mashed potatoes, eggs, all fruits, french fries, anything sweet, buttered pasta, and chicken noodle soup. 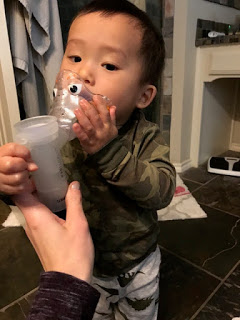 HEALTH: So, this is where we got a little sticky this month. We came down with round two of respiratory concerns, so our pediatrician busted out the big guns – steroids. We are now using steroids through the nebulizer twice a day when we have labored breathing and once a day when we don’t as a preventative measure. We will continue this until our 18-month well visit in late March. I don’t love it…or even like it…but it does seem to really help keep his breathing regulated, so we press on.
RANDOM FACTS: So, let’s see…here are a few random things we discovered about our “Chewy” this month. 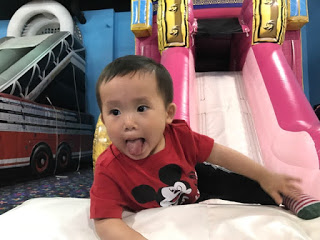 We’re fairly certain he’s left-handed. When given a utensil or a crayon or something to open, he defaults to using predominantly his left hand. I know it’s early to show a preference…but this kid really seems to prefer his left hand. Blake is not so happy about that for sports purposes…ha!

His imitation game came on STRONG this month. He imitates Carter the most, and big brother finds it absolutely hilarious. He will do something silly, like fall down for no reason, and Brooks will follow suit. If I hear Carter yell “MOM!” from upstairs, it’s basically a guarantee that I’ll hear “MA!” from Brooks shortly thereafter. It’s pretty awesome, I’ll admit.

Gone are the days of “fearless” Brooks…he has developed quite a bit of nervousness about new situations and new places. The picture above is basically the ONLY time he let me put him down last week at our play group Valentine’s Day Party at a jump place. He was just NOT having any part of it…so different than he was just a few months ago!
I think that’s about it for this month! Here’s hoping for a sickness-free month four! Have a great Valentine’s Day, friends!

One thought on “Post-Adoption: 3 Months”